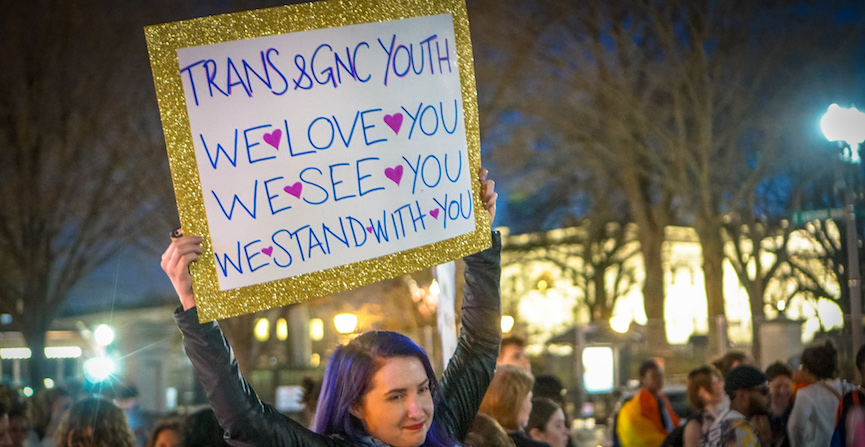 Arkansas and a number of other southern states are out to hamstring transgender people through discriminatory legislation. Photo: Ted Eytan

The state is one of a few passing discriminatory legislation of late against transgender people.

Several states, such as Tennessee, Mississippi and South Dakota have recently passed legislation barring transgender girls from playing on middle and high school sports teams, with lawmakers claiming that these children have an unfair advantage.

The  bill seeks to ban access to gender-affirming healthcare for transgender minors, including reversible puberty blockers and hormones.

ARKANSAS is now the first state to ban healthcare for trans youth. TRANS LIVES AND RIGHTS ARE UNDER ATTACK.

Here's a thread on how you can help #ProtectTransYouth pic.twitter.com/LAH5ok2p2K

Chase Strangio, deputy director for transgender justice at the American Civil Liberties Union LGBTQ & HIV Project, referred to this unprecedented bill as “the single most extreme anti-trans bill to ever pass through a state legislature.”

In more than two dozen states, two types of legislation are being considered; those that ban or restrict access to gender-affirming care for trans minors, and those that ban young trans students from competing in school sports teams.

Alabama and Tennessee are also attempting to pass restrictions on gender-affirming care. Alabama’s Senate has already approved a bill that would criminalize the act of providing minors with puberty blockers or hormones.

A Tennessee House Committee also advanced a similar measure that prohibits the provision of sexual identity change therapy to minors and would punish violations as child abuse.

Strangio and many other trans people in these states are deeply concerned about what the next weeks and months will look like as more states play copycat.

“I really worry about the fact that we're just a few votes away from some of the most sweeping and damaging and potentially genocidal laws from ever being passed, and we barely have a mention of it in the bigger national conversation of what's going on in this particular moment in U.S. history,” Strangio said.

Today is #TransDayOfVisibility . In the US, one of the most extreme anti-trans bill is just 1 signature away from becoming law in Arkansas.

Follow the link to email Gov. Asa Hutchinson to veto HB157, a bill that would strip healthcare from trans youth: https://t.co/w08CyZZG1e pic.twitter.com/kDFfWlzZQ5

Rumba Yambú, director of Intransitive, a group that supports trans people in the state, said that the bill is already having a negative impact on the community.

“It’s one of the worst bills they could have created, they said.

Even medical professionals are worried about the dangerous impact of the bill.

Michele Hutchinson, a pediatrician in Arkansas, testified in front of the state Senate last Monday, March 22.

In an emotional speech, she said that just after the bill passed the House, there were “multiple kids in our emergency room because of an attempted suicide.”

“Multiple, I’ve had multiple children — do you know how many phone calls I’ve had to file in the last week of children calling me saying, ‘Dr. Hutchinson, if this happens, I’m going to kill myself?’”

“Multiple,” the doctor continued. “So I guarantee if this bill passes, children will die, and I will call you guys every single time one does,” she said.

Yambú emphasized that it is already challenging enough for people to survive in the state, even when the government isn’t “actively creating more laws to oppress us.”

Arkansas to ban use of ‘Latinx’ in state business
January 12th, 2023
Rural Arkansas city elects 18-year old and recent high school graduate as its Mayor, youngest Black Mayor in U.S. history
December 8th, 2022
Villano Antillano shows us we can have our cake and eat it too. In her case, make-out with it
August 30th, 2022

“It’s just expected that if this passes, it will cost lives, and they don’t seem to care about that,” they said, referring to the Arkansas lawmakers who support the bill.

Strangio said that Alabama’s bill, which was passed by the state Senate last month, is the most extreme medical bill so far, as it bans care for trans people up to 19 years old and includes felony penalties. It would also prevent public funds like Medicaid from being used for any healthcare-related to gender affirmation.

If either Arkansas or Alabama pass their bills, trans youth will lose care, even if they’re already receiving it, Strangio explained.

For #TransDayofVisibility and the #TransWeekOfAction finale, let’s put pressure on Arkansas and Alabama governors to halt anti-trans legislation. Tell@AsaHutchinson to VETO HB1570 and @kayiveyforgov to VETO HB1/SB10 + HB 391. pic.twitter.com/EqzLHfG2ZG

This would be devastating to 18-year-old Zuriel Hooks, a client of the Knights and Orchids Society, who has come so far in her journey and fears seeing it all taken away in an instant.

Alabama’s bill would also mandate school staff to “out” students and tell their parents if a student affirms that their gender identity differs from the gender they were assigned at birth.

Thirty-two-year-old Nic, from Cedar Point, Alabama, said that this tactic is a way of scaring people that may be questioning their gender from ever mentioning it.

“You're actually threatening these kids’ entire livelihoods by forcing them to be out to family who may not be supportive,” Nic said.

Major medical organizations like the American Academy of Pediatrics (AAP), the American Psychiatric Association and the Endocrine Society, among others, actively support gender-affirming care for trans youth and have opposed measures intended to limit it.

At a news conference on Monday, Dr. Lee Savio Beers, president of the AAP, said that his organization “recommends that youth who identify as transgender have access to comprehensive gender-affirming care and developmentally appropriate health care provided in a safe and inclusive clinical space.”

“The bill advancing through Arkansas Legislature not only ignores this recommendation but undermines it,” Dr. Beers added.

In light of the recent news from Arkansas, here's a thread from me, a trans person who is on hrt, about the medical treatments that are normally available to trans children, what they do, and how difficult they ALREADY ARE to get.

Though the bill is headed to Gov. Hutchinson’s desk, Yambú is not defeated in the least.

“We've been here before this legislative session, and we will be here for you after,” they said. “To every trans kid, know that it is a fact, it is a fact that you were born blessed. To be trans is a blessing, and it's a blessing that scares people who are born without it.”