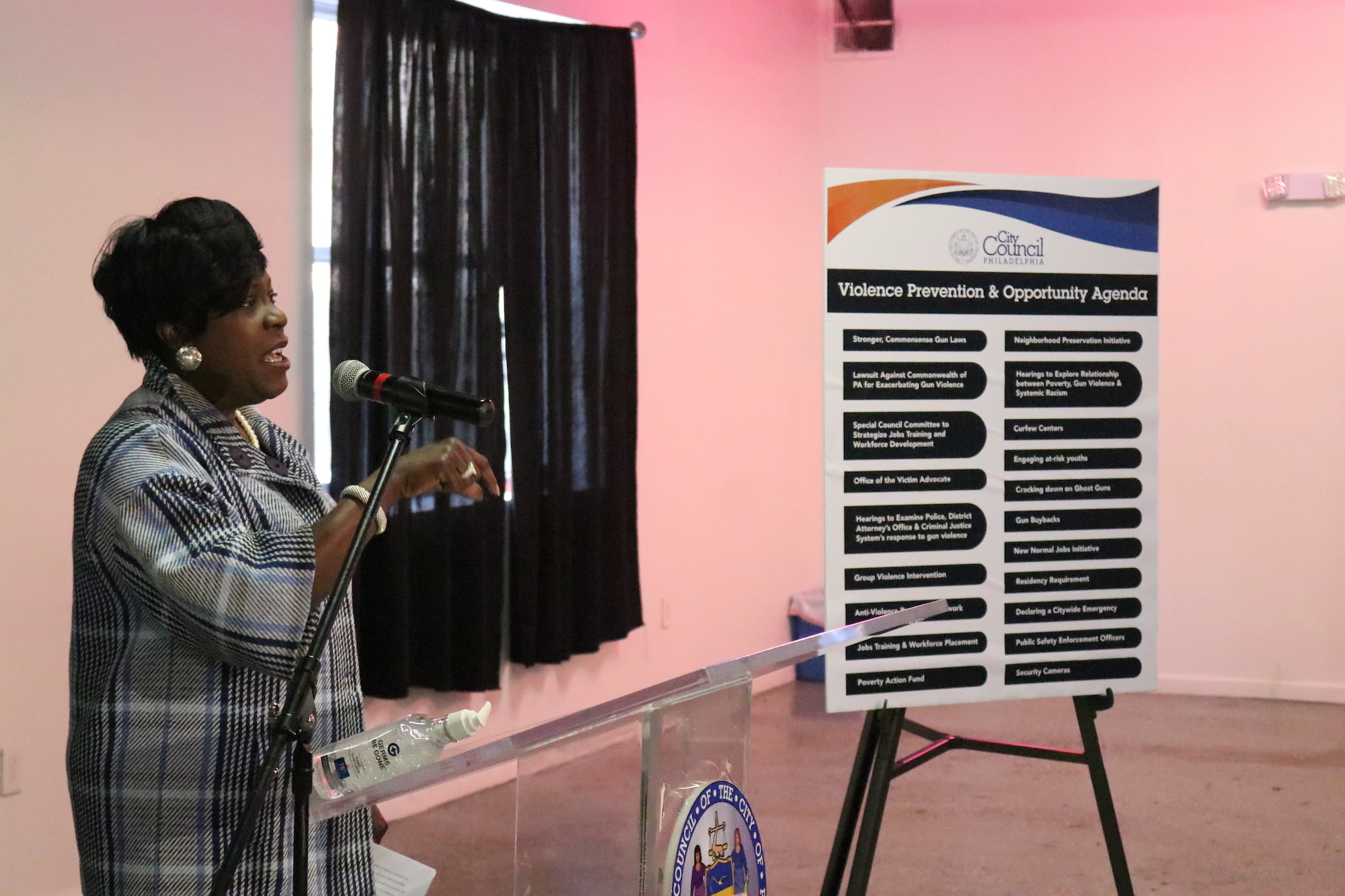 “It has to stop,” Philly City Council unveils agenda on violence prevention and economic opportunity

The plan lays out 20 efforts to curb gun violence plaguing the city and provide residents with opportunities towards a better future.

Philadelphia is on pace to have one of the deadliest years in its history when it comes to gun violence.

It’s left leaders at the community and government levels scrambling for answers and struggling, but not giving up in their efforts.

On April 13, Philadelphia City Council unveiled its latest effort. At a press conference held at Nomo Foundation at Broad and Girard, a number of councilmembers gathered in a rare in-person press conference to unveil their 20-point Violence Prevention and Opportunity Agenda. 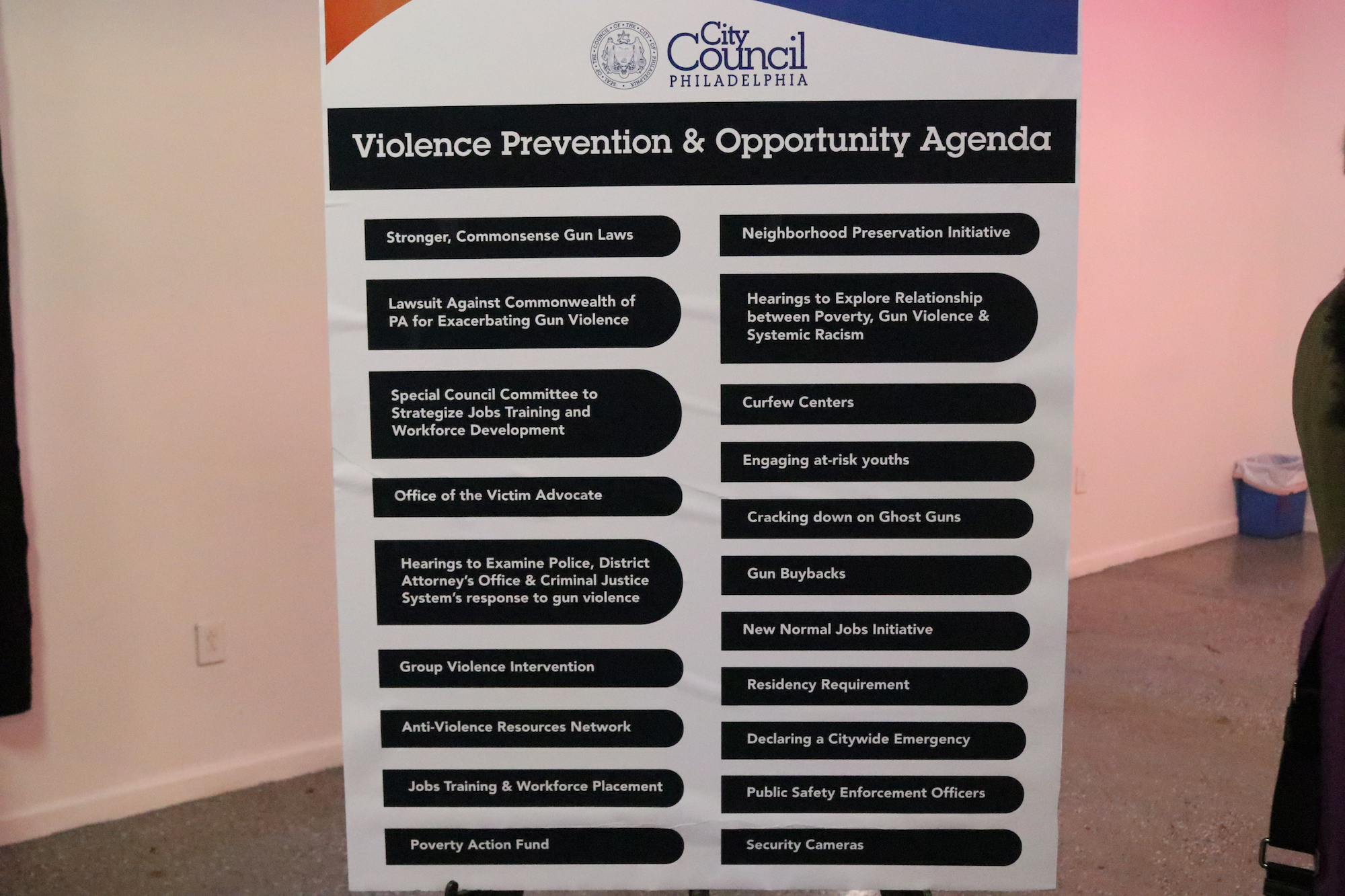 The announcement came a day before Mayor Jim Kenney’s annual meeting with City Council over Philadelphia’s operating budget in the next year. Council President Darrell Clarke mentioned in his speech that he hopes to push many of the efforts listed to get funding for them, or their expansion.

According to a Quarterly City Managers Report from mid-February, 2021, Philly is staring down a budget deficit of $450 million heading into Fiscal Year 2022. That being said, President Joe Biden’s American Rescue Plan Act is bringing $1.4 billion in COVID-19 relief funding, which Clarke called an “opportunity.”

He and the other members of City Council present at Nomo on April 13, pitched their case for investment in both violence prevention and economic opportunities.

Clarke compared Philadelphia’s gun violence crisis over the last year to that brought by the coronavirus pandemic. In responding, the city must also come together and pool solutions.

“We did what we had to do to address that, but guess what?” he said. “Concurrently, this is a very similar situation in terms of a crisis… We need to do something, and we need to do it, like, now.”

The stress comes not only from the sheer amount of shootings and homicides, but also that a growing number of victims in 2020 and so far in 2021, have been children and adolescents.

“Children are not being able to play, or do what they need to do as children,” said Clarke.

The unveiled agenda points to developing better engagement with at-risk youth through community orgs across the city (like Nomo) and potentially creating curfew centers that would further keep youth off the streets at certain times of night.

In his own speech, Councilmember Kenyatta Johnson separated the need for gun violence solutions from politics and commended his colleagues and community organizations for their work around the issue.

But given their positions, he laid the onus of solving gun violence on their shoulders.

“Folks may try to come in and help us do this work, but at the end of the day, no one is going to save us, but us,” he said. “When we get sick and tired of being sick and tired, that’s when we will change the trajectory of this city when it comes to the issue of senseless gun violence.”

Parker in particular, touched on the importance of access to opportunities to truly put gun violence to rest. In the process, she called out the hypocrisy of such initiatives if they don’t include Black and Brown communities

In the opportunities sphere of City Council’s agenda, it includes the creation of another City Council Special Committee on Strategizing Job Training and Workforce Development, its $10 million New Normal Jobs Initiative, and more partnerships with community orgs on job training and workforce placement, among other ideas and initiatives.

Other key points of the agenda include, City Council’s $10 million Poverty Action Fund, the creation of the Office of the Victim Advocate, the pending lawsuit against Pennsylvania for its failure to pass stronger gun laws and preemption, and various police reform ideas and actions.