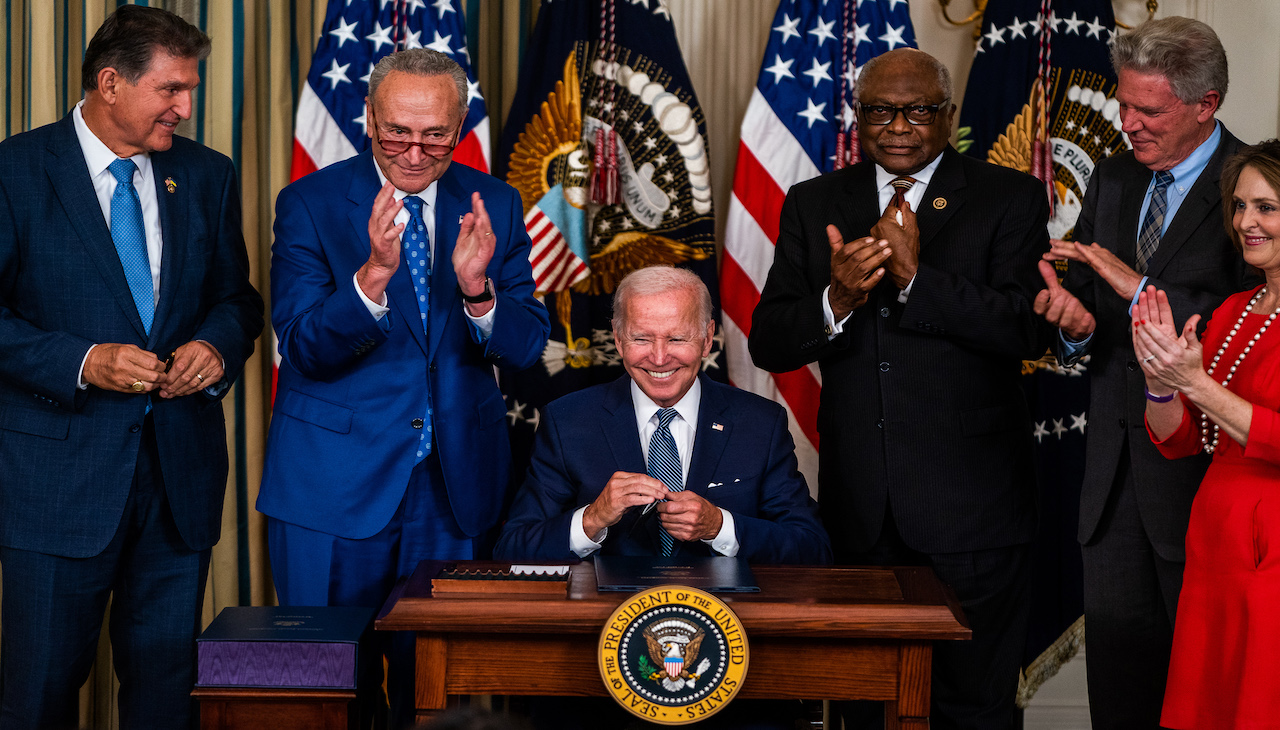 Biden signed the climate, health care, and tax bill on Aug. 16, and released some targeted marketing about what it does.

On Tuesday, Aug. 16, President Joe Biden signed the Inflation Reduction Act into law. It further fulfills Biden’s promises to create an economy that is fair for all communities, families, including the Latino community. The $750 billion bill focuses on health care, climate change, and taxes.

Not long after its signing, the White House released a fact sheet particularly for Latino communities, and how they’ll benefit from the legislation.

Biden called the law during the signing ceremony, "one of the most significant laws in our history.”

“With this law, the American people won and the special interests lost,” he told a room of Democrat members of Congress and officials in his administration.

After a Summer filled with political turmoil, the bill is the latest in a series of small wins for Biden and Democrats ahead of the ever important November midterm elections.

In what is considered to be the most aggressive piece of legislation combating the climate change crisis, it will also lower prescription drugs, health care costs, and energy costs. It will also raise taxes on the wealthy and corporations who have not paid their fair share, if at all. Anyone making less than $400,000 a year will not pay a dime more in taxes as a result. For Latinos and other communities of color, it will help them in many respects, especially economically.

For Latinos and Latino families across the country, the bill will overall lower health care costs, which includes prescription drugs. This also means the expansion of health care access and coverage for millions of Latino families. The lowering of prescription drug prices is a huge win for all Americans, but especially Latinos and seniors in the country who have been subject to health inequities for most of history.

Among Latino seniors 65 years and older, they were more than 1.5 times as likely than their white counterparts to have trouble affording necessary medication. Latino seniors are also more than twice as likely to not fill their prescriptions at all because of the high cost.

The bill will also cap the yearly cost of prescription drugs at pharmacies at $2,000 a year, which will help significantly compared to the many more thousands they were forced to shell out as a result, which includes insulin being capped out at $35. It will also allow Medicare to directly negotiate the price of usually high-costing drugs, as well as requiring drug manufacturers to pay a rebate when they raise the price faster than inflation.

This comes as more than 10 million Latinos since 2019 that have been uninsured prior to Biden taking office. Many prior to Biden taking office had fallen into what is known as the “coverage gap,” — over 640,000 Latinos according to the White House because their respective states did not expand Medicaid and locked them out of coverage. Since Biden became President, the uninsured rate has reached a record low of 8%. As a result, more than 5.2 million people have gained health care insurance.

It will also combat the climate change crisis, which often affects Latino families more so than other demographic groups. The bill will take on more renewable alternatives that will lower costs and improve quality of life. It will make it overall much more affordable for Latino families to purchase energy and electric efficient appliances that will lower their cost of electricity in the long run. They will save over 30% more on just tax credits alone as a result of the new affordable alternatives.

According to the U.S. Small Business Administration, there are more than 4.65 million Latino small businesses in the country, which accounts for the largest growing segment of U.S. small businesses. In Biden’s bill, it also includes a lot of provisions that will save these businesses a lot of money as it relates to high energy efficiency upgrades on their buildings. It will help save businesses money and allow them to provide higher-paying jobs in the long run.