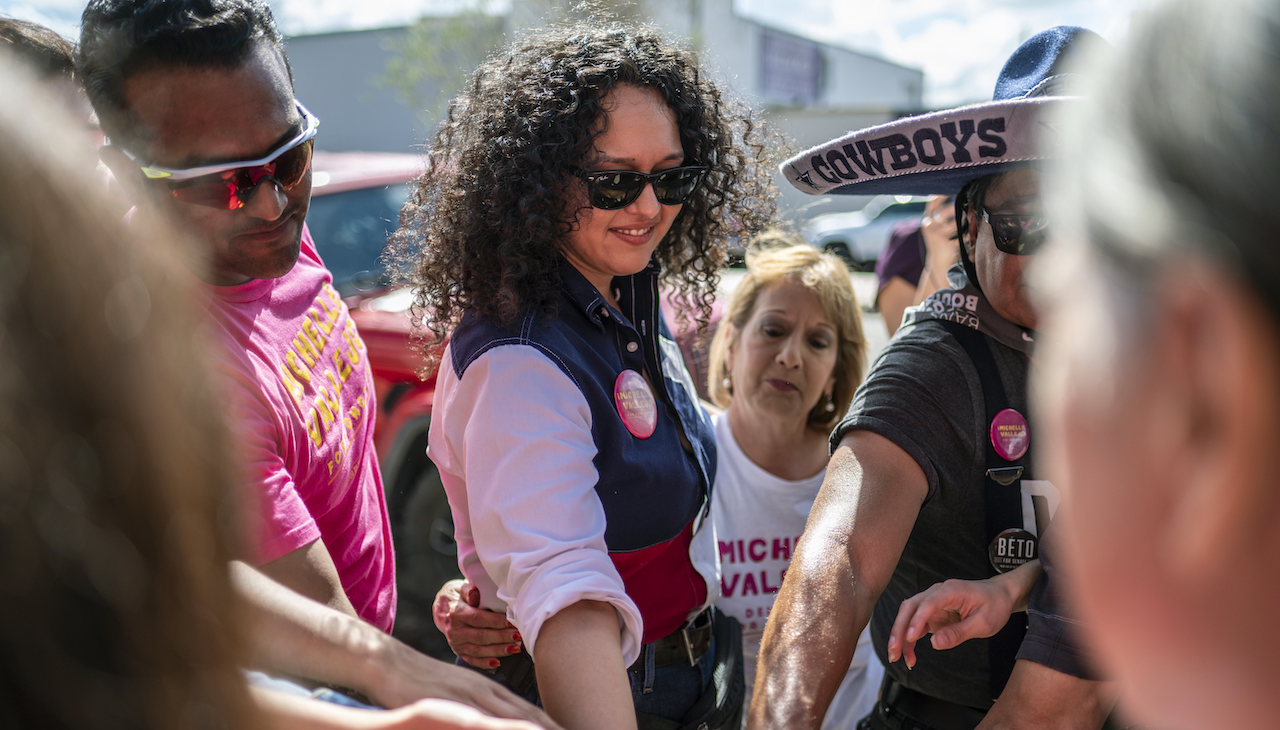 The DCCC spent more than ever before on Latino and Spanish language outreach in 2022, but they’re still on the defensive

The House Democrats’ political arm spent big money to engage voters of color and still lost the House, calling for the DCCC to change their strategy.

During the 2022 midterms, Latinos overwhelmingly voted for Latino and Latina candidates, according to a memo provided to NBC News from the Democratic Congressional Campaign Committee (DCCC).

It also added that the Latino support the DCCC — House Democrats' political arm — gained in recent years, contradicted almost two years of predictions from national news pundits, media figures, as well as particular Democratic experts predicting there would be an overwhelming Latino move to the right.

But the predictions weren’t entirely off.

Republicans still won control of the House during the 2022 midterms, taking 222 seats compared to 213 for Democrats, with a Senate runoff in Georgia taking place on Dec. 6 to potentially give Democrats more of an edge than they had after 2020 in the chamber.

The memo also revealed that while there were small incremental increases in Democratic support in certain districts in Arizona and New Mexico, there was a noticeable decrease in Latino support for Democrats. It is a trend that has occurred since the 2020 Presidential election as many have flipped allegiances over mostly economic and crime issues.

According to the memo, the campaign committee spent a whopping $18 million on television and digital ads, in addition to other forms of advertisement to help them engage and specifically target Latinos in many of the nations races. This is more than double the spending done for the Latino voting bloc back in 2020, the DCCC said.

In addition to the spending, they also set aside $30 million this election cycle for its Build Our Base program, which is for “reinforcing” and “growing support” among voters of color.

“We did historic investments when it came to Latino voters and voters of color,” said Maríafernanda Zacarías, DCCC senior adviser for Latino engagement. “We were on the ground organizing for over a year and a half before November of this year… and it grew from already having those relationships on the ground to paid media.”

“Latino electorate-heavy districts from Virginia to Texas to Nevada turned out in support of Democrats,” the DCCC stated.

Rep. Vicente González in South Texas’ 34th District — who defeated Mayra Flores by 8.5 percentage points and where about 86% of registered voters are Latino — was also one of many beneficiaries of the DCCC’s huge spending.

The over $100 million expense on Spanish ads was just one part of the big-money, ultimately unsuccessful effort to hold the House Democratic majority, even while Democrats maintained control in the Senate.

In the 2022 midterm cycle, the DCCC dropped over $100.4 million on TV, radio and digital advertising in total, according to AdImpact. $4.6 million of that was on Spanish-language advertising while over hundreds of millions were additionally spent by Democratic and Republican campaigns, in addition to their affiliated groups.

Matt Angle — who runs the Lone Star Project supporting Texas Democrats and Democratic strategist — was in agreement with the DCCC that the GOP ultimately fell short of their plan to gain traction with Latinos, with the exception of Florida that became redder than it has ever been. Angle added that Democrats invested huge money to keep ahold of whatever Latino support was left and “mostly succeeded.”

While they may have mostly succeeded, in Angle’s eyes, Democrats ran “an almost entirely defensive strategy based on not losing ground with Latinos, rather than broadening and deepening support for Democrats beyond districts already held or drawn to be held by Democrats.”

Angle called for even more money to be poured in and that an earlier investment this go round might have helped guarantee wins for candidates in certain competitive districts and undercut significant progress Republicans made in their development of local Latino leaders who will help them in the long run.

The GOP have the Latino vote in Florida, but not the Southwest where growth is skyrocketing
December 12th, 2022
Latinos once again determined election outcomes in Arizona with massive turnout
November 30th, 2022
The new Latino class of Congress for 2023
November 28th, 2022

“Democrats will continue to be on the defensive without a longer term investment to create political structure that exists beyond individual campaigns,” he said.

Another liberal strategist and a well known critic of the right because of their huge investment in Latino voters and hiring of Latino consultants, Chuck Rocha, said that there was no doubt that Latino voters “helped make history in the midterms.”

“But there is also no denying that if we want to win back control of Congress in 2024, we will need to win Latino-heavy congressional districts we lost in 2022 midterms," Rocha said.

Some of those Latino majority districts that were lost include District 27 in Florida, where Annette Taddeo lost to Republican Maria Elvira Salazar, and the 15th District in Texas, where Monica de la Cruz defeated Michelle Vallejo in a redrawn district to favor the GOP.

The DCCC spent over $4.7 million in English language ads and roughly $13.9 million on Spanish language ads in California's 22nd Congressional District, the site of a GOP win for David Valadao over Rudy Salas.

Vice president at the GQR polling and opinion firm, Albert Morales, said for future races, candidates should and cannot afford to wait on the DCCC or any other organization to fund them.

“We tend to think of the DCCC as an ATM," Morales said. "If you want to run for office, you have to make sure you show you have some game."

But there is big money in these kinds of state and federal races as 2022 was a record breaking year in spending.

Total spending on state and federal races during these past elections will reach or go above $16.7 billion, breaking the previous $13.7 billion spent four years ago, according to OpenSecrets estimates.

But for all the big money spent, you would want to see some results.