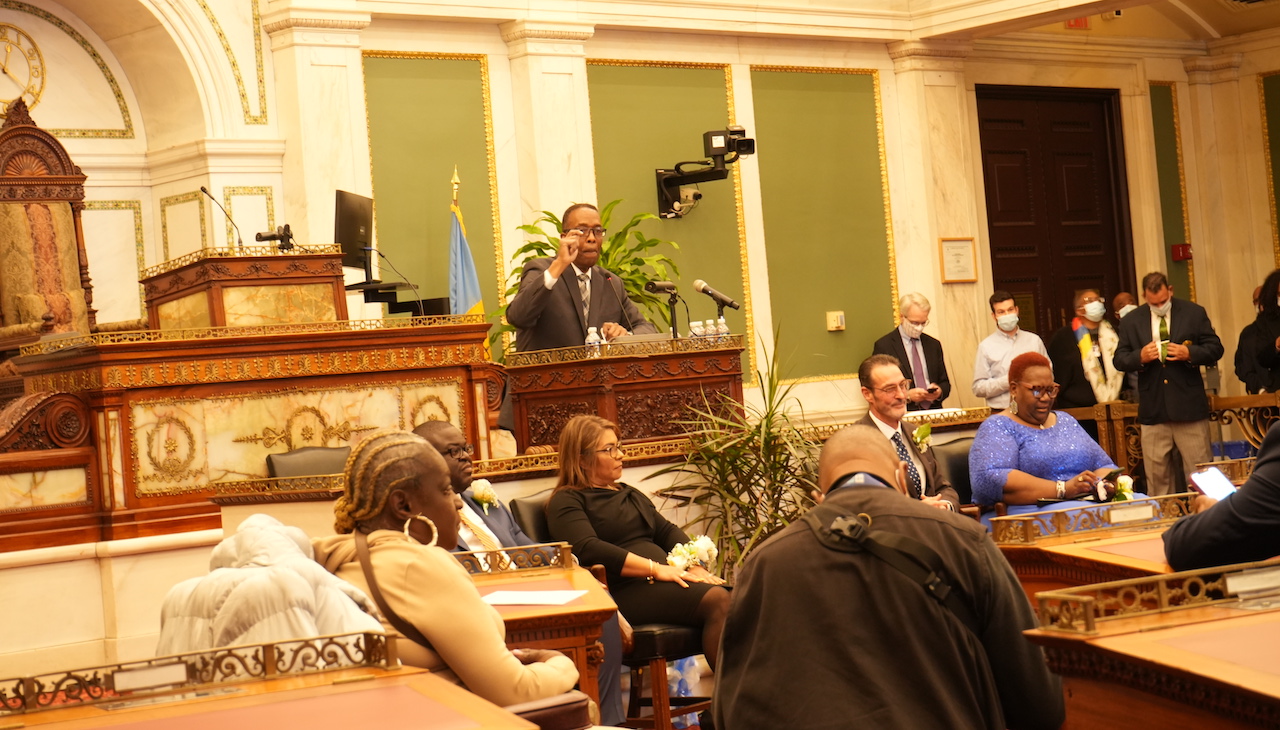 It was a packed chamber as Council President Darrell Clarke opened the ceremony by welcoming all the PA and Philadelphia public officials that were present.

“It’s a good day,” he said, before beginning the introductions.

The four being sworn in were new District 7 and 9 Councilmembers Quetcy Lozada and Anthony Phillips, and new at-large members Sharon Vaughn and Jimmy Harrity.

With Monday’s ceremony, the four are now the official replacements of 2023 Mayoral candidates María Quiñones-Sánchez (District 7), Cherelle Parker (District 9), Derek Green (at-large) and Allan Domb (at-large). All were present as their successors were sworn in.

Lozada, Phillips, Vaughn, and Harrity will serve the remainder of the four-year term of the outgoing councilmembers and then run for reelection in 2023, starting with the May midterms in Philadelphia. The election cycle will also elect a new Philadelphia Mayor — its 100th.

She is a former chief of staff for Quiñones-Sánchez and a longtime community activist in Kensington. Her job immediately before running to be Quiñones-Sánchez’s replacement was at Esperanza as the Vice President of Community Engagement and Organizing.

Phillips, the other new district councilmember, is the co-founder of the nonprofit Youth Action, which develops leadership in middle and high school students across Philadelphia. In his speech before the chamber, Phillips said it was a difficult decision to leave the organization he founded when he was 14 to pursue a career in City Hall, but the same kids he serves were the ones who ultimately convinced him to make the jump to city politics.

“‘Mr. Anthony, go do that City Council thing because we need people like you,’” Phillips recalled of their words. “They encouraged me to do this when I didn’t believe in myself.”

In turn, with his time in council, Phillips says he hopes to build the same “village” he had to help him along the way for youth across the city.

For new at-large Councilmember Jimmy Harrity, that “village” came from the unending support of his wife and best friend, PA State Senator Sharif Street. He thanked both during his speech to the chamber for sticking by him through the good and the bad, and giving him his “second chance.”

The last new member to speak was longtime City Council staffer Sharon Vaughn, who had the chamber on its feet as she gave her speech. She was known to many in the crowd and in City Hall as someone who’d dedicated her last 30-plus years to work in city government.

“But never in this capacity,” she told the crowd. “I didn’t come here to play, I came here to slay.”

The new members’ current terms are a short year that will include a lot of campaigning, but could still offer a glimpse of what the legislative body could look like until the next city election in 2026.

If the previous 2019 city elections were any indicator, it could be a whole new look city council setting the standard for the city well into the future.