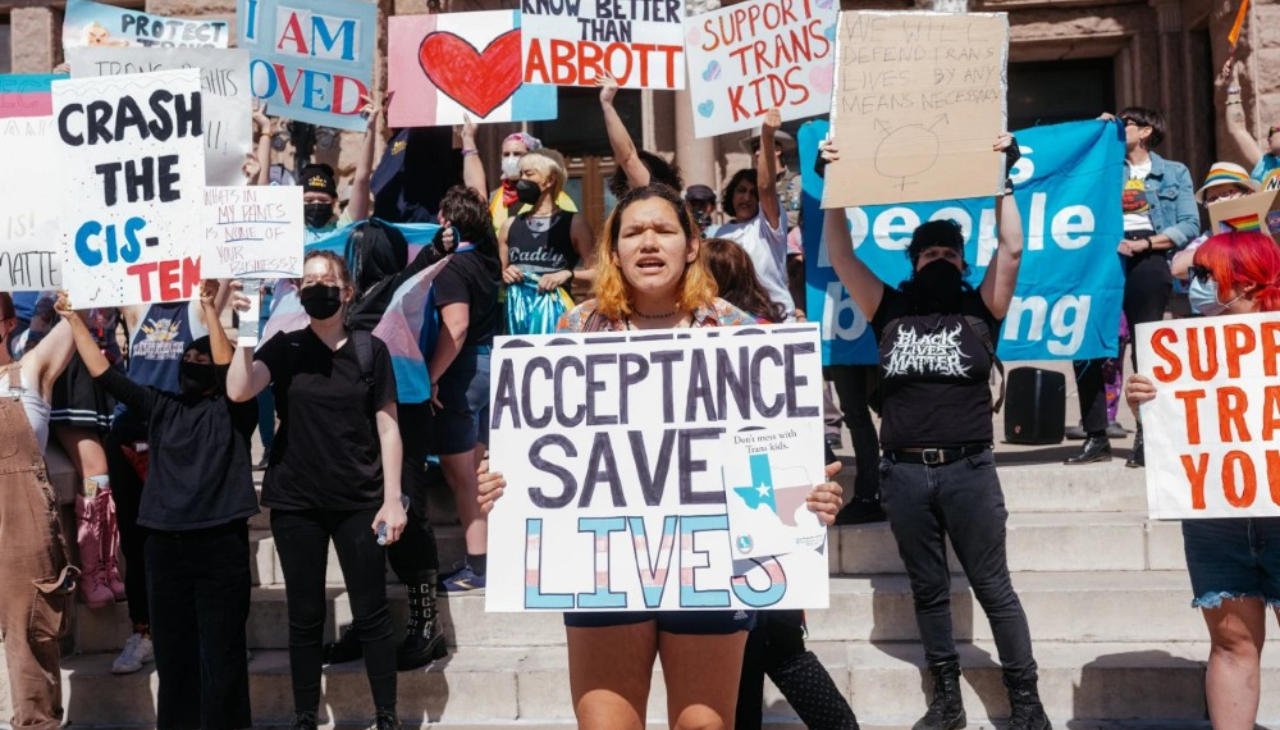 A protest against Gov. Abbott's directive was held outside of the Texas State Capitol on March 2nd. Photo credit: Christopher Lee / The New York Times via Redux

These debates have had a profoundly negative impact on the mental health of transgender youth.

In a recent survey, The Trevor Project found that 85% of transgender and non-binary youth reported that the debate around anti-transgender bills has had a negative impact on their mental health.

These bills and, in the case of Texas, directives, have impacted transgender children’s abilities to play sports or have access to gender-affirming care.

As of now, 11 U.S. states have passed laws that ban transgender children from playing school sports on the team that fits their gender. A similar law is making its way through the Utah legislature, but Governor Spencer Cox announced on March 7 that he would veto it.

The most recent state to pass a bill like this was Iowa after Governor Kim Reynolds signed the bill into law on March 3. This law bans transgender girls and women from competing on girls' teams across the board. This includes both public and private K-12 schools, community colleges, and colleges or universities that are affiliated with NAIA and NCAA. Plainly put, this law is a total ban from school sports.

Supporters in the state have hailed the law as a victory, while opponents worry about the harm it could cause.

One of the bill’s staunchest supporters Ainley Erzen, a high school senior and runner, said that the law allows girls to achieve things like records and scholarships without being “sidelined in their own sport.”

Ashlyn Keeney, another high school senior and runner, argued against this telling KCCI, "Individuals aren't transitioning just to beat girls and they're not pretending to be women. They are women." She added that what she’ll remember most from playing is her team and that she rather get possibly beat, than know there were people who wanted to run with her who couldn’t.

Freshman Gavy Smith, a transgender girl who plays volleyball, echoed this. "I don't play sports for the competition. I just play it because I find it fun. I love the environment, being able to play with my friends and just being included because that's what helped me through my transition is playing sports with friends," she said.

The first confirmed investigation actually involved an employee of DFPS. In a lawsuit filed by the ACLU on March 2, the employee stated that she was put on leave and told that her family would be put under investigation because her transgender daughter is receiving gender-affirming care. She was put on leave hours after asking how this directive would affect the department’s policy.

The next day, District Judge Amy Clark Meachum blocked the investigation and set a hearing date for March 11 to see if a temporary block on the directive should be issued.

The directive has caused panic among parents and medical providers of transgender children. Some parents are even considering moving out of the state.

Another plaintiff of the same ACLU lawsuit, Megan Mooney, is a psychologist and a mandatory reporter. She believes that if she has to follow the directive, it would violate her professional ethics and cause trauma to her patients.

According to the statement they released, they are doing this to “safeguard our healthcare professionals and impacted families from potential criminal legal ramifications.”

Texas isn’t the only state to do something like this. Arkansas and Tennessee have both put forth legislation to ban gender-affirming care for minors. Arkansas’ law was passed and was set to go into effect in July 2021, but was blocked by a federal court days before it could.

So what is the impact that these laws have on those affected? According to the same poll from The Trevor Project, when transgender and non-binary youth were asked how three types of legislation made them feel, and the overwhelming response was angry.

Leila Saidance of The Daily Texan reported that around 300 people gathered at the Texas State Capitol on March 1 to protest the directive.