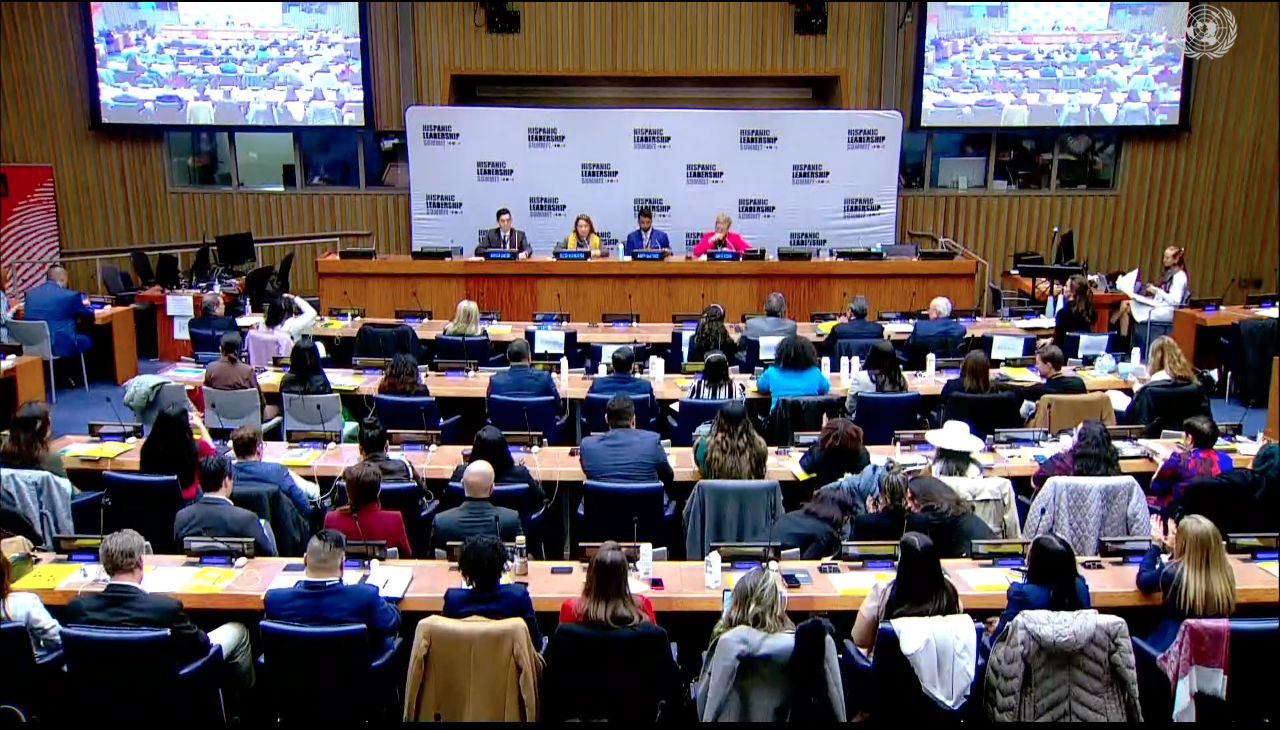 The 2022 Hispanic Leadership Summit will run until December 8. Photo: Screenshot.

Teamwork, the way to empower Hispanics on the global agenda

A panel of experts met at the 2022 Hispanic Leadership Summit to discuss how to uplift the Latino community.

With a panel made up of Alicia Buenrostro, ambassador and deputy permanent representative for the Mexican Mission to the United Nations, as well as Caryl Stern, executive director of the Walton Family Foundation, and Marty Martínez, executive director and founder of Social Revolt Agency, launched the first session of this year’s We Are All Human Foundation’s Hispanic Leadership Summit in New York.

"Elevating the Hispanic Community on the Global Agenda" was the name of this talk aimed at establishing some of the challenges that the Latino community currently faces as a demographic group in the United States, a population that is not only growing larger, but with greater decision-making capacity.

Although they are still perceived as a minority or even as invaders, Latinos increasingly have more representation and economic power to create changes in the country and continue to boost their economy, something that has yet to be reflected in the way this community is seen, both in the media, and in the number of Hispanics who occupy leadership positions in different companies in the public and private sectors.

As we kick off the program to discuss advancing a shared agenda that will most effectively advance the US Hispanic community. What are some key areas for effective impact? #HLS2022 #HispanicLeadershipSummit #TogetherWeShine Live streaming at https://t.co/SF1y10Or9c pic.twitter.com/U0vpcVa6TX

Highlighting the sustainability goals of the United Nations (UN) as something that Latino communities should focus on, especially those that have to do with gender and migration, Buenrostro points out that it is necessary to work as a team to achieve it.

“Gender and migration are two of the most important objectives, and the ones that present the most obstacles. On the one hand, we are experiencing a strong push back in terms of women's reproductive rights, and on the other, we are seeing how conditions for migrants are worsening, with scenarios where they are even being exploited,” said the ambassador.

Likewise, Martínez highlighted the way in which climate change has been affecting the country's Hispanic communities more strongly, especially those in states such as Florida and Puerto Rico that have suffered the impacts of a more severe climate, something that increases the number of obstacles that these families must draw lots to be able to get ahead.

“Climate change is hitting our communities in a way that it is not affecting others. It must be on the agenda, not just globally, but locally. It is going to be a constant trend and it interacts with all sectors,” stressed Martínez.

For her part, Stern stressed the need to pay more attention to mental health, especially that of Gen Z youth, who have not yet recovered from the emotional effects exacerbated by the pandemic or who still find it difficult to adapt to the new dynamics.

Among the challenges that Buenrostro pointed out as critical, which are several, the ambassador highlights the lack of financial education, specifically in Latina women, as an obstacle for them to advance, and whose teaching she describes as crucial.

“Equality is something that we must continue to promote, as well as work on concerns such as climate change and mental health. Working together is the only way to obtain long-term solutions,” highlighted Buenrostro.

Likewise, Stern pointed out the importance of seeking common ground to find solutions: “We all want the same thing, and we have to find a way to work together to achieve it. The best solutions are found when we work together, the public and private sectors.”

“We need to invite young people to be part of the solutions. We need to have an abundance mentality, set an example as a community of working together to find solutions,” added Buenrostro.

To conclude, Martínez invited attendees to become mentors and sponsors of other Latinos, explaining that this joint support constitutes one of the effective strategies to grow the numbers of Hispanic representation in corporate America.