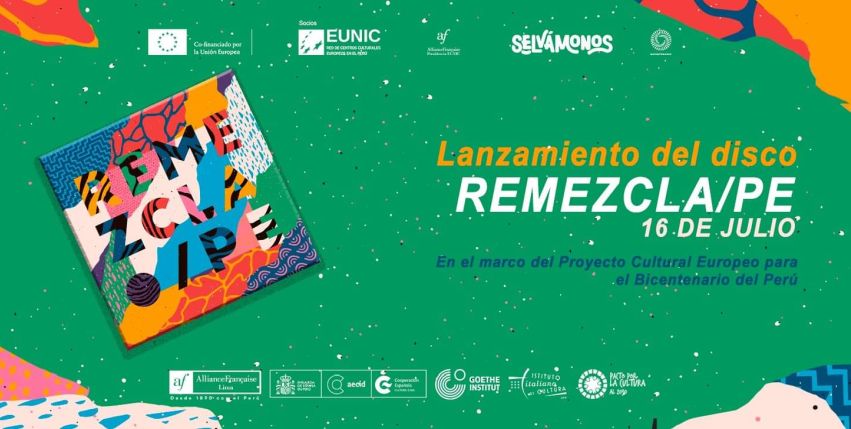 Official poster of the album Remezcla/Pe in celebration of the 200th anniversary of Peru's independence.

Singers, DJs and more artists come together in Remezcla/Pe, an album that represents the cultural diversity of Peru for the celebration of its Bicentennial.

This year, Peru celebrates the Bicentennial of its independence.

In commemoration, musicians from all over the country have collaborated to launch the album Remezcla/Pe.

If Peru is recognized for its great natural and cultural diversity, it is also worth mentioning that cultural exchanges with other countries have given birth to musical proposals that fuse modern and traditional styles. Remezcla/Pe is a project of Peruvian artists that showcases its cultural diversity.

Within the framework of the European Cultural Project for the 200th anniversary of Peru, the European Union in Peru, together with the network of European cultural centers in Peru-EUNIC and the Alliance Française de Lima, the project was born with different visions and musical styles. Under the production of the Selvamonos Productions agency, some of the best musical exponents were summoned to reinterpret and reinvent the diverse sounds of Peru.

Among the Peruvian singers, groups and DJs who have participated in the production of Remezcla/Pe are artists of long tradition, different genres and native languages, such as Renata Flores, the queen of trap in Quechua; Saturnino Pulla; Danitse; Hit La Rosa; Liberato Kani, with his rap of resistance in Quechua; Juan "Cotito" Medrano, Afro-Peruvian music culturist; Cumbia All Stars, Miguel Ballumbrosio; LaLá; La Patronal and Marco Campos.

Also participating are DJs such as the emblematic Miki Gonzalez, now called MIKONGO; Lara Nuh, QQQEQA, Maribel Tafur and Shushupe. The album alsofeatures foreign collaborators, such as El Remolón from Argentina, Bial HClap from Mexico, Colombian Carla Valenti, Barda from Argentina, Naoba from Nicaragua, among others.

Remezcla/Pe features fifteen original tracks and will be released on July 16. For now, one can enjoy a trip to Peru through its rhythms at the following link.