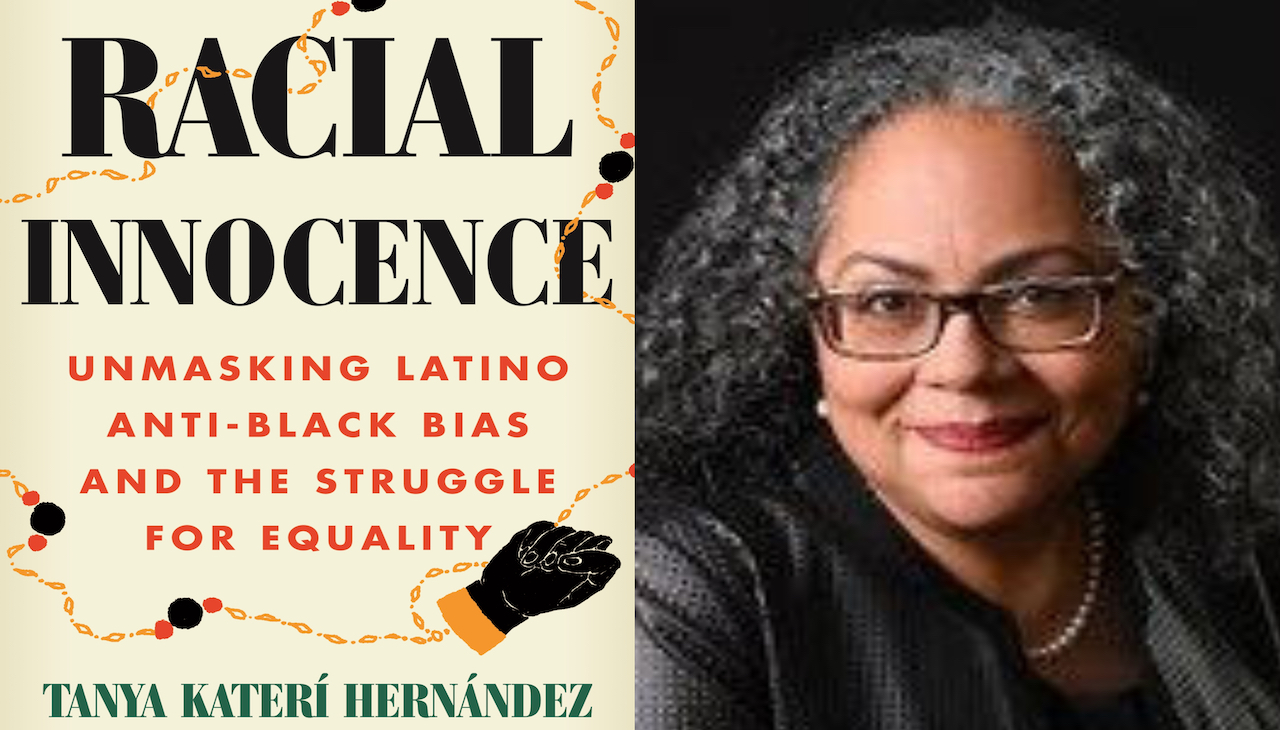 ‘Racial Innocence: Unmasking Latino Anti-Black Bias and the Struggle for Equality,’ shines light on a problem the community has denied and buried.

Same-race discrimination and colorism among the Latino community has always existed. Whether it be U.S. Latino populations or those in Latin America and the Caribbean, the racial attitudes towards darker Latinos, Blacks, and Afro-Latinos has been constant and is a deep-rooted issue that not only has psychological effects, but also surfaces in every other facet of life, like the workforce, criminal justice system, police, housing, and even schools.

It is an ideal that many Latinos themselves reject and deny, some fervently. It is also a subject that has not been widely covered, if ever, or studied.

Considering the huge Latino population in the states, and the almost 1 billion people in Latin America, it has needed a long look and action to combat its continued existence. With greater reason and importance, there is finally a full-scale and researched book that covers this very subject as well as its consequences.

The first of its kind, Racial Innocence: Unmasking Latino Anti-Black Bias and the Struggle for Equality is a comprehensive study on colorism within the community.

Through legal cases, personal accounts, and statistics, Professor Tanya Katerí Hernández, an author and professor at Fordham University’s School of Law, uncovers and shines light on the problem that many Latinos deny to be true. While it is a researched and comprehensive look at the issue, it is also a personal project for Hernández.

“As a community that has experienced discrimination, then there's oftentimes a resistance to acknowledging that we too, can be part of the problem of discrimination, that victims themselves are also aggressors,” said Hernández. “When it comes to issues of discrimination, I call it a psychological barrier and certainly a social dynamic that is quite prevalent.”

Another factor is also the recent efforts to break the monolithic mold, and recognizing the racial differences in “Latinidad” among Latinos, which is being pushed more and more by newer generations.

“The young people in our communities are pushing that further for us. And so that's, at least, been broached,” said Hernández. “But for the longest time, that was viewed as sort of an act of discrimination itself to bring up our racial differences, let alone the way in which our racial differences within Latinidad differently situated us with regards to experiencing discrimination. That there is a difference between a lighter skinned and a darker skin Latino, as far as experiencing discrimination or being targeted for it.”

The book looks at how colorism and racial attitudes towards darker and Afro-Latinos affects many different facets of life. This includes discrimination in schools, workplaces, and the criminal justice system. While the book looks to shine light on the issue and further expose the realities of the situation, it aims to open the community’s eyes to the problem.

In Hernández’s view, there is still a lot of work to do on that front.

“Unfortunately, right now, we are obstructed from making this situation better… because we all unfortunately suffer from a racial illiteracy… Latinos, African Americans, the rest of society, are racially illiterate, as particularly when it comes to issues of how people of color, Latinos included, can be part of the problem of racism,” she said. “That can't be confronted, addressed and resolved, if we're so busy hiding from it, and not even realizing it's in our mix.”

“I do think that building a greater sense of understanding about the situation is certainly the first step,” Hernández continued.

One of the more surprising pieces of information from the book is that darker and Afro-Latinos experience discrimination in schools from K-12 into college, especially in Latino-majority schools and at the hands of other Latinos. There, Hernández also said teachers were not helpful to those clearly experiencing hate.

“It was heartbreaking to hear about children of color, African-American, Afro-Latino alike, being differently treated, and in a very impressive and pejorative way from Latino school teachers,” she said.

At one point, when interviewing a Latino educator that does in-service training for teachers serving a Latino-majority population, they revealed that “issues of discrimination are viewed as irrelevant.”

“Latino and Latina student teachers view that as ‘well that’s not our issue,’” Hernández recalled being told.

It harkened back to her previous realization of “racial illiteracy” among communities of color, but also presented an access point to slowly make change.

“I both was disheartened to hear about these accounts, but also realize that that is a real target area, that the in-service training has to be culturally attuned to being able to intervene into Latino defense against raising issues of concern about racism, by directly addressing it,” said Hernández.

As for the workplace, the book also explores the Latino racial attitudes in the labor market where even despite the marginalization of Latinos in the workforce, Latino workers with Latino supervisors make less, and are never likely to hold positions of power.

It gives the impression that Latinos are able to take advantage of their own. Hernández said some of it has to do with the old adage that “power corrupts,” and racism is amplified when it comes from an unchecked source.

“When Latinos have this power, and their racial attitudes are unchecked, because they're perceived or they perceive themselves as not part of the American issue of racism, then they're allowed to have consciously and unconsciously their racial attitudes turn into actions that harm and subordinate others,” she said. “Because in the end, it's all about anti-Blackness, regardless of what you know, the ethnic origin.”

Racial segregation also exists in many different forms. One that is specifically mentioned and spoken about in length in the book, is residential segregation. This informs many aspects of life and even affects the allocation of community and educational resources. As a result, inequities in all of its forms arise.

“Everything is about where you are living. We don't tend to think of how key that is, but it is and so in the housing market, that is already racially segregated, then you have a second level of segregation,” said Hernández.

That second level sees Latinos carry out the same housing discrimination that has long been in place in urban and suburban areas for centuries.

“When Latinos are saying ‘no, no, not here, I don't want any Blacks here,’ that then means that there's a further level of anti-Blackness that is impeding the ways in which Afro-Latinos, African-Americans are able to have access to social mobility in our country,” said Hernández.

In law enforcement, these same racial attitudes towards Blacks, and Afro-Latinos exist. With the historical context that has seen Blacks and Afro-Latinos have been mistreated by police and the criminal justice system, it only deepens when Latinos themselves are also adding to the problem.

Additionally, as mentioned in the book, some Latinos have gotten themselves involved with white supremacy groups, such as the few that joined in on the Charlottesville rally back in 2017. When asked about if that number is expected to increase, Hernández said it is hard to tell, but gave further explanation on why some Latinos join. For her, there’s a very psychological motivation.

“They get a big boost. The wages of whiteness. They get to be associated with whiteness,” said Hernández. “It may not put dollars in their pocket, but it gives them a psychological boost.”

When Latinos themselves are in part responsible for the oppression of their own, it raises questions about why and how. Historically and generally speaking, Latinos as a whole are an oppressed and marginalized group. They cannot get basic rights, health care, education necessities, and are priced out of their neighborhoods in which for example they own a business and employ white people and other Latinos.

Hernández says the upcoming elections will be a big sign of the progress or regression of the community.

“We're at a turning point. We need to make some decisions as a community. Are we going to just accept the symbolic form of inclusion, meaning, ‘you're welcome, as long as you're not Black?’ Or ‘you're welcome, as long as you also say, you don't want to be with Black people,’ but not get any other kind of access to social mobility?” she said. “Or are we really going to dig in deep, and both do internal examinations of our own racial attitudes, in order to be more responsive, and take responsibility for how we can be part of undoing racism and creating a sort of liberation for all of us together?”

The book is also dives into Hernández’ personal story in relation to the topic of colorism and discrimination within the Latino community. More specifically, it explores how families may treat and allocate familial resources among their children when one is lighter than the other in complexion.

This also includes the style of hair in which straight hair is considered “pretty” as opposed to curly. For better or for worse, these kinds of experiences at the hands of their own

parents and family, are what shape a person, their thoughts, and ideals.

“I spent a great deal of time in the book talking about family and the memoirs of Afro-Latinos, the pain that they have experienced about being differentiated within their own families,” said Hernández.

“As Latinos we always take such great pride in saying that we're this rainbow of colors, we have everything and we don't have whites and Blacks because all of us together are just one happy rainbow family. Yet, within these rainbow families, I hear time and time again, and these memoirs certainly parallel that the Latino family always knows which person’s the Black person,” she continued. “Families are busy creating a pecking order and allocating familial resources, according to the array of colors, like the spectrum. This then becomes about how we are creating tears of oppression within our own communities. It starts with the family.”

Being part of the solution

The issue that has long existed within the community has been denied, ignored, and gone unacknowledged. However, a lot has to be said on how this has not been hugely covered, talked about, or studied.

To have a book now entirely dedicated to the issue and perhaps some suggestions and how to better the reality, Hernández hopes it will create awareness but more importantly, while Latinos themselves have been part of the reason for the groups oppression, that makes Latinos more able to look themselves in the mirror and be a part of the solution going forward.

“I want to create awareness. But then with that awareness, be able to give people the tools with which to be able to be able to identify and dismiss when there are deflections from actual instances of discrimination, and racism that are defended with it what I call the pseudo defense to racism,” she said. “I want for people to be able to have the tool set from reading the book, to be able to say, ‘oh, wait a minute. Don't talk to me about as if you're racially mixed cultural ethnic group creates this racial cloak with which you are racially innocent, you are part of the problem. And that means you can also be part of the solution.’”