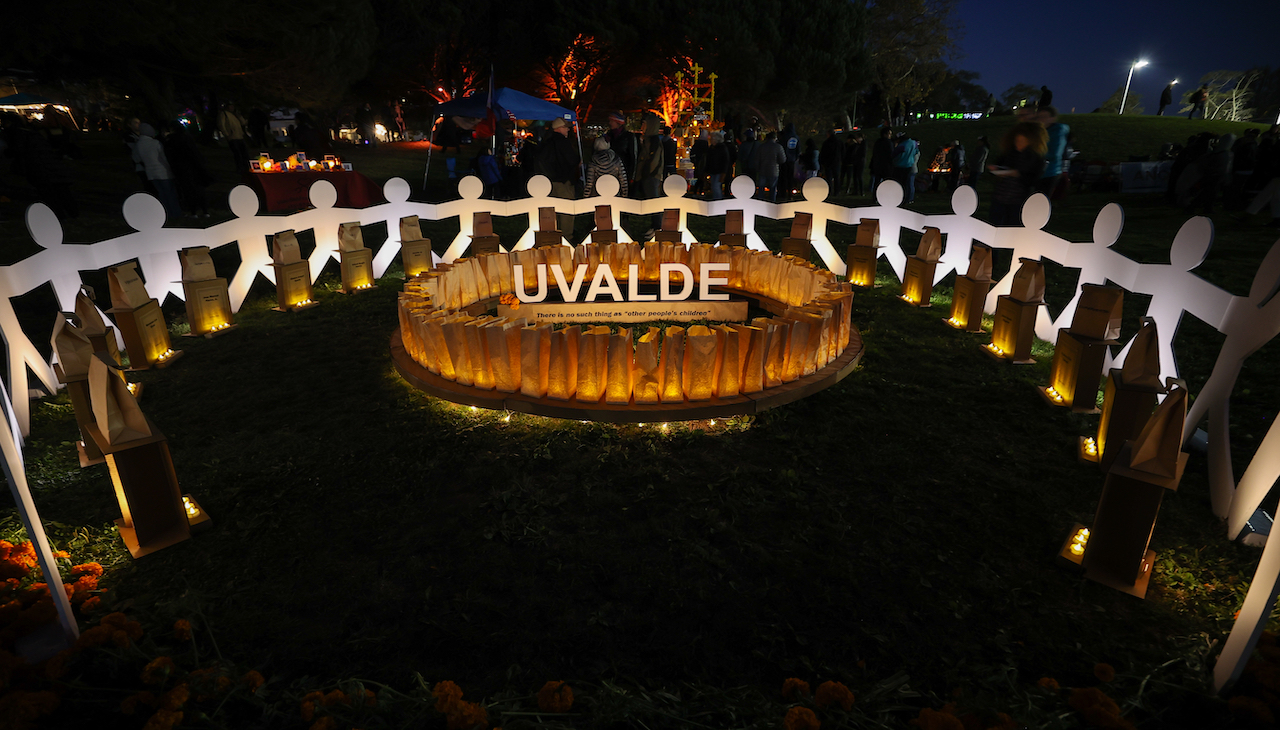 An altar in the Mission District of San Francisco. Photo: Tayfun Coskun/Anadolu Agency via Getty Images

Many cities in Texas, Chicago, and Los Angeles created touching tributes for the teachers and children lost.

Día de los Muertos is a Mexican holiday meant to commemorate the deceased and loved ones left behind and involves family members and friends leaving offerings on altars, such as their favorite meals, snacks and other items to remember the particular lost soul.

It occurs over the course of three days — Oct. 31 through Nov. 2 — and this year, cities across the country, including Houston, San Antonio, Austin, Chicago, and Los Angeles, all in their own way honored and commemorated the victims from the Robb Elementary School shooting in Uvalde, Texas.

From individual art pieces to beautiful, collectively decorated altars, there were more than a few emotional and touching tributes to the 22 lost in Uvalde.

In Chicago, the National Museum of Mexican Art (NMMA) held its 36th annual ‘Day of the Dead exhibition’ by honoring the Uvalde victims and having an “ofrenda” or offering installation put together by students from Bernhard Moos Elementary School.

“It’s very different than Halloween,” said Cesáreo Moreno, chief curator and visual arts director of the NMMA. “It’s a day in which Mexican communities gather to remember their loved ones who are no longer with them. They gather in the cemetery all night in some cases, and it’s a very public beautiful display of memory and family.”

In the installation, it featured Monarch butterflies, which represent the souls of student victims, and two skeletal angels above that represent the teachers who died in attempting to protect them. The students also created mock yearbooks featuring descriptions of things that each child victim loved.

"The beauty of these children, and the hope that they represent, is such a huge loss,” said former assistant principal at Bernhard Moos Elementary, Mary Carmen Moreno.

Also on the altar were two desks, a chalkboard, and a pecan tree, symbolizing Robb Elementary School. There is also a poem on the chalkboard by Nahuatl poet Mardonio Carballo that explains the relationship between every living being and those who have cared for them.

“One never leaves completely, there is an invisible thread that unites the butterfly to its mother,” the poem reads.

In San Antonio, the tribute went viral on TikTok during "Muertosfest," that occurred this past Saturday, Oct. 29, as Lainer High School's art club created an altar consisting of 20 personalized desks for each of the 19 students who died and one for both of the teachers.

It also served as a simulation for a classroom where all of the students' desks faced the teachers' desk. As a further touching sentiment, families of the victims were allowed to take the desks home.

There was also a photo of each victim that was followed by a petition in their name for different causes like gun violence prevention, and helping survivors of violent crimes.

In Houston, the nonprofit arts and culture group, Multicultural Education and Counseling Through the Arts (MECA), honored the victims with murals of the children's names. This was on display at the city’s annual Día de los Muertos celebration festival.

“We say people’s names over and over again so they will not be forgotten,” exhibit curator Luis Gavito told KHOU-TV.

In the Texas Capitol of Austin, families and other supporters participated in the ‘Marcha de los Niños,’ where they marched from the steps of the Capitol to the front of the Governor’s Mansion. An altar honoring the victims was carried by family members. Behind them, were citizens holding candles, and offerings. In front of the Governor’s Mansion, they left their offerings of flowers and stuffed toys and mariachi sang songs and a priest held a prayer.

In Los Angeles, eighth grade students at St. Charles Borromeo School in North Hollywood also joined in with a specialized tribute. Students created ‘ofrendas’ over the course of two weeks for each of the victims. They put the names and pictures of the children in individual shoe boxes and decorated the altars with items like candies, toys, and rosaries. The altars were displayed at a vigil prayer service at San Fernando Mission Cemetery on Nov. 1. Auxiliary Bishop Marc Trudeau blessed the offerings along with six others.

Rafael Luna contributed to the nationwide commemorations through his own customized ofrenda on display at the State of Texas Fair exhibit, titled Mundo Latino: Celebration of Life, in Dallas.

“Even though we didn’t know these children, we knew about the tragedy,” Luna told the Today Show. “We don’t want to forget and we don’t want to simply move on."