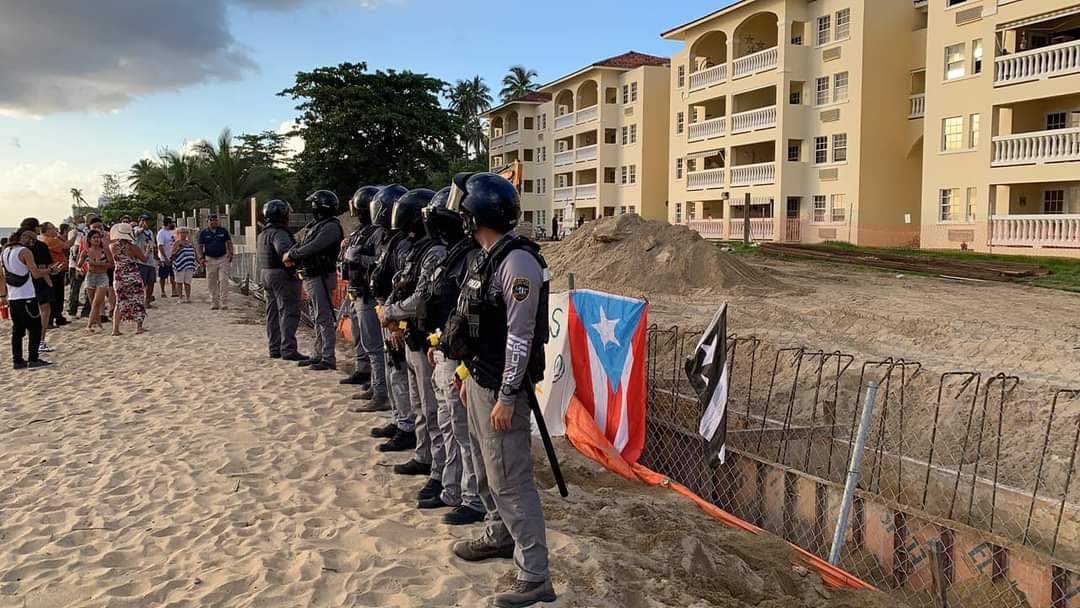 The beach is public, making the construction of a swimming pool illegal. Photo: Robinson Camacho Rodriguez.

Protests in Rincón, Puerto Rico demand a stop to construction at a beach reserved for endangered turtles

Protestors say a pool being built in connection to a nearby condominium is too close to the beach. Citizens and environmental activists in Rincón, Puerto Rico are protesting the construction of a swimming pool that is part of Sol Y Playa condominiums just outside of the public beach, Los Almendros.

The beach is home to an endangered species of sea turtles, who use the sand as laying grounds for its eggs.

Around 200 demonstrators in Rincón spent days protecting the beach and released the rising tensions they’ve felt over the past year regarding colonization and condominium projects on public land.

During the protest, locals gathered around the concrete fence, singing and chanting “the beach is for the people,” while a heavy police presence looked on.

Protestors demolished the gate that bordered the construction of the swimming pool, stating it was too close to the beach. The site also violates the federal Endangered Species Act, a law enforced to protect sea turtle habitats on that same beach.

Rep. Mariana Nogales Molinelli of the Citizens Victory Movement and a spokesperson for the protestors, said they have not damaged any property at the construction site.

“There has been violence on the part of the state,” Nogales Molinelli told the San Juan Daily Star. “The police have used excessive force.”

Security guards heckled demonstrators and aimed homophobic slurs towards a gay couple. Videos also show a young protester being grabbed by her hair by a police officer and the use of excessive force in many other instances by officers.

Citizens in Rincón are also frustrated with the politicians involved in the development of the swimming pool. Gov. Pedro Pierluisi announced on Saturday that the violence must cease.

“I call for prudence and respect,” the governor said. “The right to protest is unquestionable but there is no right to violence or damage to private property because that is a crime. It can be deferred but we have to defend the rights of all.”

Pierluisi also stated police have a right to protect the development of the swimming pool.

He said the “government of Puerto Rico has the duty to ensure these rights [to protest], and if necessary, the Puerto Rico Police will intervene to guarantee order.”

Protestors are in the process of filing a complaint against the police officers that used excessive force to quell demonstrations.

Developers at the Sol y Playa condominium decided to stop construction of the complex’s swimming pool given the increase in protests and social media attention.

At the moment, residents do not know when they will get back to building the pool.

Puerto Rico had been through a handful of devastating losses and destructions to its land, especially over the past five years. The island is still reeling from the trauma of Hurricane Maria, a natural disaster responsible for the loss of nearly 3,000 lives.

The aftermath of Hurricane Maria also left Puerto Rico with over $90 billion in damages.

The island is also seeing an uptick in transgender murders. In 2020, six transgendered people were killed on the island. In late January, Pierluisi declared a state of emergency and signed an executive order to bring awareness to the murders.

Demonstrations are still continuing as many locals are camping on the beach, listening to music, and chanting in efforts to protect their public land.